When my Grandma Georgie was born on Nov. 3, 1902, women didn’t have the right to vote. Seems hard to believe.

When she did gain that right, Grandma Georgie would march to our small town Ohio polling place every election day. She was determined to exercise that hard-won right to vote.

As a child, I would jump rope with my sisters to a rhyme but I didn’t know what it meant. “In came the doctor. In came the nurse. In came the lady with the alligator purse,” we would chant. 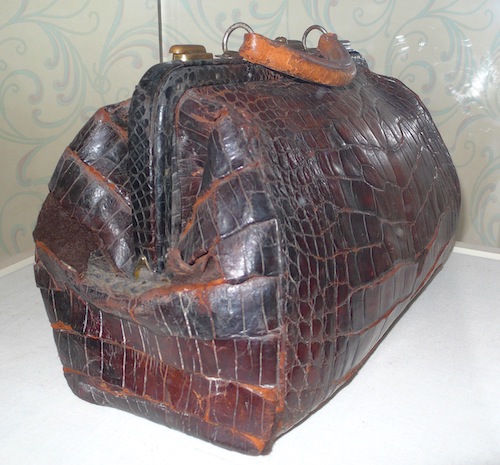 “To Susan B. Anthony, the purse was a symbol of a woman’s financial independence and a woman’s right to ownership,” said museum guide Jeanne LaBarbera.  “It wasn’t a fashion statement on her part. It was a symbol of power for women.”

Pointing to Anthony’s large alligator purse on display at the museum, LaBarbera said that, in Anthony’s day, women didn’t need purses because most women didn’t own anything.

Whatever valuable assets were in a marriage usually belonged to the man, as did the children. A wife could not sign a contract, open a bank account, seek custody of her children or make a will. Women were barred from higher education and almost all professions except teaching.

Anthony used her alligator bag more like a briefcase for her speeches and important documents. “Susan B. Anthony was recognized by her two trademarks – her red shawl and her alligator purse,” LaBarbera said.

Touring the museum, 16-year-old Melinda Thompson of Buffalo said, “It seems hard to believe that there was a time in America when women couldn’t vote. And now we have women running for the highest office in the nation. I wonder what Susan B. Anthony would think of that? We owe a lot to her. She dedicated her life to equality.”

Indeed, she did. And somehow she seemed destined for that role.

Birth of a Suffragette

Born into a Quaker household in Adams, Mass., on Feb. 15, 1820, Susan Brownell Anthony was a precocious child who learned to read and write at the age of 3. Her father Daniel owned a local cotton mill and was known for his outspoken views and strong commitment to equality and justice.

Anthony attended a one-room schoolhouse and was dismayed when her male schoolmaster refused to teach her long division. Girls didn’t need to know such complicated math, he claimed.

Indignant, her father took the girl out of school and started a home school for his children and neighborhood youngsters. Anthony was later sent to a boarding school near Philadelphia to continue her higher education.

When the 1837 depression caused her father to go bankrupt and lose his business and family home, the Anthonys moved to Rochester. Anthony became a teacher when still a teen to help with family finances. Her weekly salary was $1, just a quarter of what men were paid for the same job. She began campaigning for equal pay and equal rights.

After her father died, the family moved to a simple brick house on Madison Street. Anthony, her mother Lucy and sister Mary lived in this house from 1865 until their deaths. “The house was a hubbub of action during the 1800s,” LaBarbera said.

Anthony was friends with many important people of the time and her home was always open to them. It was in the Madison Street house that the suffrage movement came to life. It was here that a civil rights newspaper, The Revolution, was written by Anthony and fellow activist Elizabeth Cady Stanton.

On Nov. 5, 1872, Anthony set out for a nearby barbershop determined to vote whether it was legal or not.  Despite disapproving sneers, Anthony demanded to register and to vote. She voted for Ulysses S. Grant – the first and only presidential vote of her life. Nine days later, a federal marshal came to her home to arrest Anthony for illegal voting.

At her trial, the judge commanded the all-men jury that they need not deliberate and that “you will find her guilty.” The judge also told Anthony that she would not be allowed to take the stand or speak on her behalf. “But the judge must have forgotten because he turned to her and asked ‘Does the defendant have anything to say?’” LaBarbera said.

Anthony was ready. She eloquently spoke her piece which went on the written record.  The judge ordered her to pay a $100 fine. “She said she wouldn’t pay it and she never did,” LaBarbera said.

In 1878, she wrote the Susan B. Anthony Amendment, which would later become the 19th amendment, giving women the right to vote. Regrettably, Anthony did not live to see that happen.

“She caught a cold and it turned into pneumonia. On March 13, 1906, she passed away in this house. She was 86 years old,” LaBarbera said. “Susan B. Anthony’s battle cry was ‘Failure is impossible.’ She knew it was coming but she would not be there to see it. “ On Aug. 18, 1920, the 19th Amendment was ratified giving women the right to vote. “Susan B. Anthony devoted her life to this cause,” LaBarbera concluded. “No one should ever take it lightly that we have the right to vote.”

Photographs, old-fashioned typewriters and documents scattered throughout the home recall those times. Most of the photos I had seen of Anthony always showed her in a side view. I thought it just might be a fad of the time but our guide said otherwise.

“Susan B. Anthony had a lazy eye so she preferred to be photographed in profile because she didn’t want people to see it.”

One of Anthony’s signature black dresses still hangs in her bedroom. “She was always well dressed,” LaBarbera said. “Even when she was arrested, she had them wait while she came upstairs and changed clothes because she always wanted to be seen well dressed.”

Cover photo: Susan B. Anthony preferred to be photographed in profile because she had a lazy eye. Photo by Jackie Sheckler Finch

2 thoughts on “Susan B. Anthony Museum Honors Woman Who Fought for Right to Vote”

Newspaper reporter, photographer and travel writer, Jackie has cruised on large and small vessels on many rivers and oceans. One of her greatest joys is taking to the road and waterways to find the fascinating people and places that await over the hill and around the next bend.
More...